Our hours and locations have changed. Be sure to check our Visit Us page for more information.
Learn More
Our walk-in and drive-thru lines are subject to early closure when we reach capacity.
Learn More
The Tax Office will be closed Monday, July 4, in observance of Independence Day.
Learn More 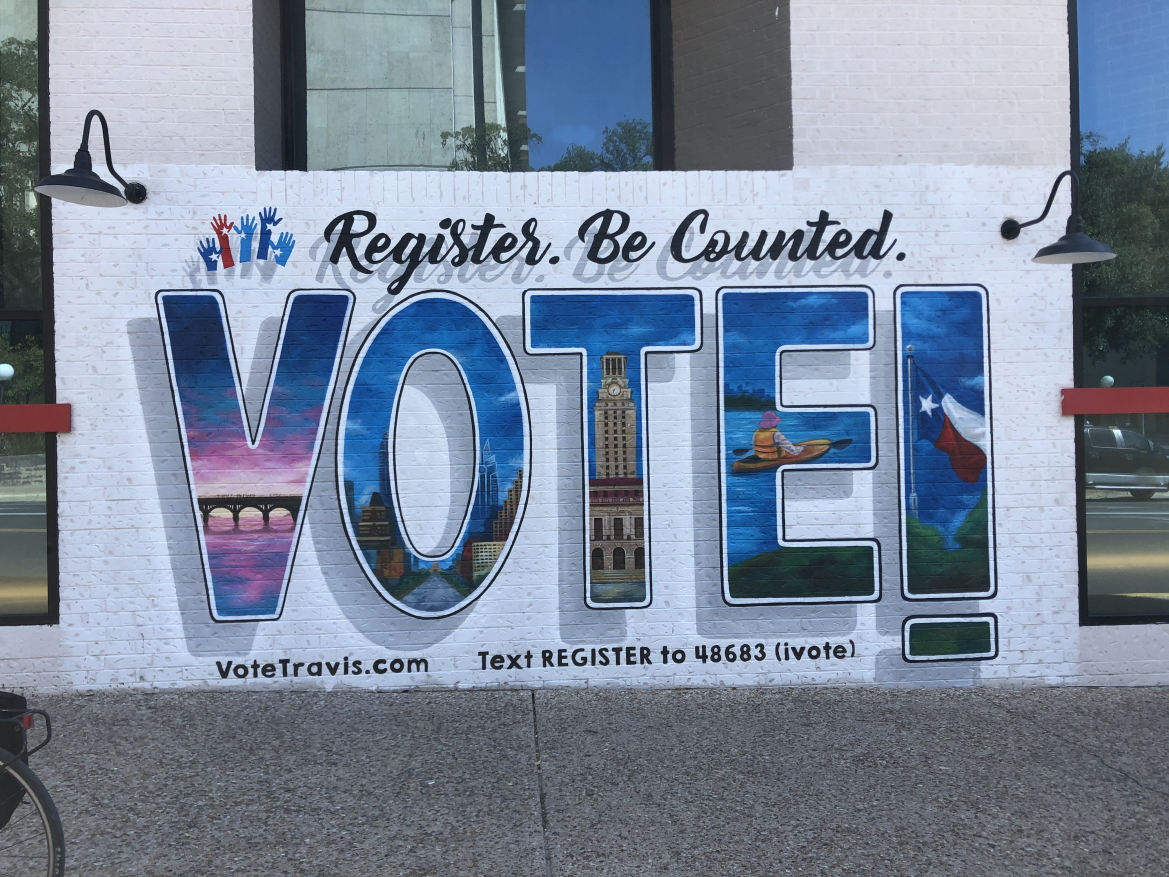 In a city known for its amazing street art, there is a new mural in town ready for visitors to snap photos.

The register and vote mural, located on the Dobie Twenty21 building (formerly Dobie Mall) adjacent to the University of Texas campus, will, hopefully, become a social media star, helping to remind UT students and others about the importance of voting.

The mural design came from the 2019 high school mural contest sponsored by the Travis County Tax Office and Austin’s League of Women Voters. The one painted on the Dobie Twenty21 wall was a design submitted by German exchange student Joel Klemm, who was attending Austin High School.

“We hope Travis County residents will snap a picture in front of the mural and share it with their family and friends on social media,” said Bruce Elfant, the county’s voter registrar and tax assessor-collector. “The Nov. 3 election is an opportunity to make a difference in our country, state, county and city and we need everyone to register to vote before the state’s registration cutoff on Oct. 5.” Early voting begins Oct. 13.

Text2Register allows any eligible Texas voter to text “register” to 48683 (I VOTE) to receive instructions on how to complete voter registration in their county.

Gretchen Nagy, the tax office’s Voter Registration Division director, encourages those who come to see the mural to also share information on Text2Register.

“We are hoping our register and vote mural goes viral in Texas,” Nagy said. “That can happen with the help of Travis County residents sharing photos of the mural and Text2Register information on their Twitter, Instagram, Facebook, Reddit, Tik Tok and website accounts.”

Nagy’s division ran the mural contest in spring 2019. Originally, the mural was to appear on a wall in the Mueller Development in September 2019, but finding a mural painter proved challenging. Meanwhile, the wall where the mural was to appear became blocked by a growth spurt of nearby trees. Fortunately, Trinity Properties, the owners of Dobie Twenty21, jumped at the opportunity to host the mural.

“We really appreciate the Mueller Development for their partnership, which includes allowing us to have a voter registration booth at their Farmers Market every Sunday” Nagy said. “We also want to thank Trinity Properties for their dedication to voter registration and voting by giving us a home for our mural.”

September 2020 is the perfect time to unveil the register and vote mural, Nagy said.

“We cannot imagine a better time to debut the mural as a way to encourage eligible voters to register and vote in the upcoming Presidential Election,” she added.

The mural was painted by artist Lucas Aoki. A video of the mural coming to life is expected to be distributed later this month.